Actor Steve Martin just so happens to be a serious art collector. His collection includes an extensive and diverse array of early and modern artists, but to his great surprise he discovered something completely new and fresh in 2015; it was unlike anything he had ever seen. In 2015 he visited a show in New York featuring work by an Aboriginal artist. He was instantly captivated. He has gone on to acquire an astounding collection, and one of his most treasured works is by the late Bill Whiskey Tjapaltjarri.

Below: Steve Martin, pictured with work by Bill Whiskey Tjapaltjarri, Rockholes and Country near the Olgas, 2007, 205 x 300cm, in his New York apartment.
Read more: Steve Martin, the unexpected advocate for Aboriginal art, The Independent, 21 May 2019. 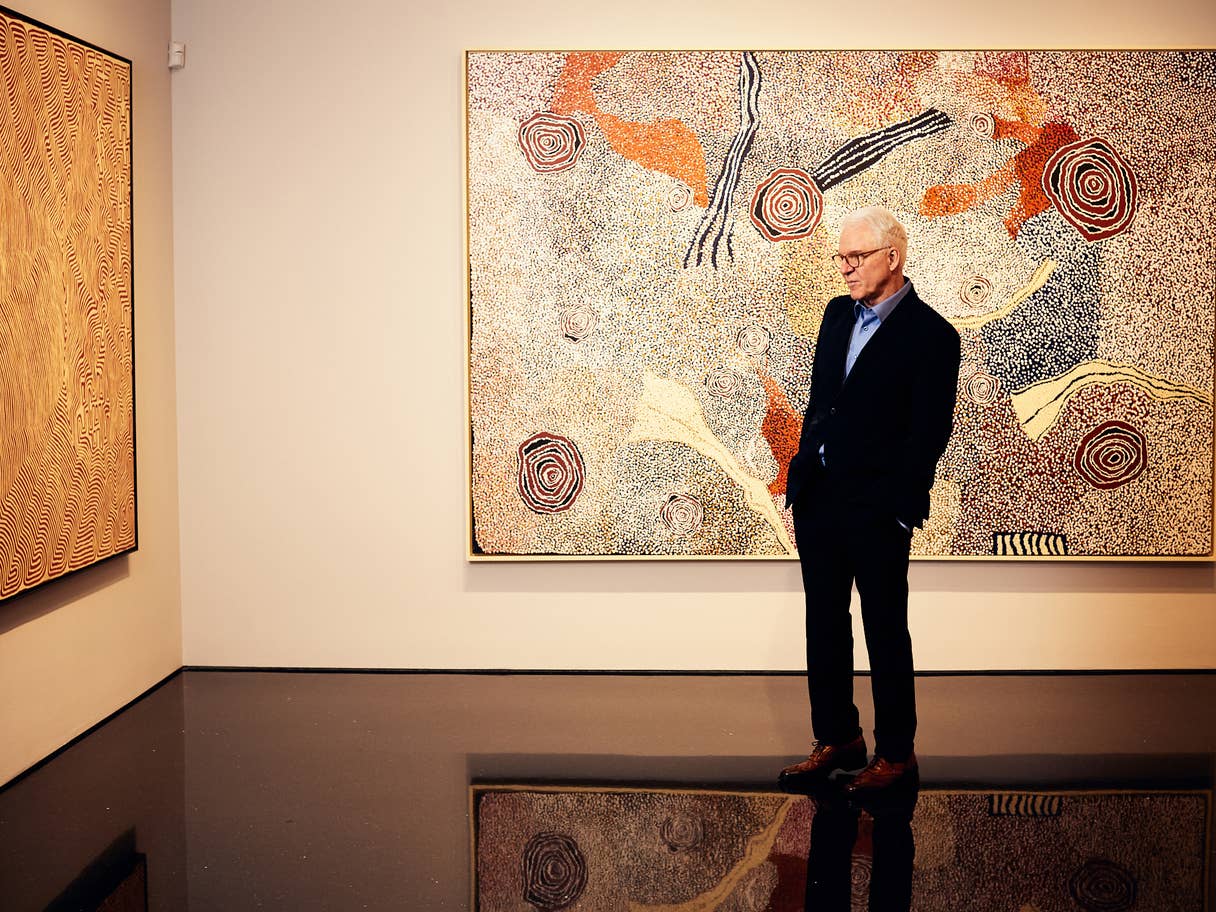 Bill Whiskey Tjapaltjarri, a Pitjantjatjara man, was born in the 1920s at Pirupa Akla, country located near the Olgas and to the west of Ayers Rock.

By the time he was a young man, most of Whiskey’s family had passed away. Many of his people had begun moving towards Haasts Bluff mission, about 250 kms to the north east. Whiskey joined a group who were about to make that journey. None of these desert people had seen white people and when they arrived at the mission, they were completely naked.

Whiskey, along with some of the others, decided not to stay as they were frightened when they saw Europeans for the first time. Their fear came from the belief that these white-skinned people were Mamu, or bad spirit people, and so the group continued to travel on. They eventually arrived at an area near Areyonga where a white missionary Pastor called Patupirri had established a camp. It was here that Whiskey and the others first tasted white man’s food. Whiskey tells how they would throw this strange food behind their backs as they didn’t like its taste. Whiskey spent a little time with Patupirri before moving back to the Lutheran mission at Haasts Bluff, where he had been told there were plenty of women. This time Whiskey stayed, and was given his first set of clothes.

At the mission he met, and later married, Colleen Nampitjinpa, a Luritja woman from Tjukula in Western Australia. He recalls that when he first saw Colleen’s light, sun-bleached hair he immediately knew she was the one for him. The couple and their family subsequently settled at an outstation at Amunturrungu (Mount Liebig), 100km north-west of Haasts Bluff and Whiskey never returned to his home country. While living at the Haasts Bluff mission, Whiskey took a job as cook for the contract fencers and mustering crew. It was here he came to be called Whiskery, owing to his long bushy beard, and the name eventually evolved into Whiskey.

Bill Whiskey Tjapaltjarri was a “big business” man in his community – a Ngangkari, or traditional healer, with people coming from far and wide to be treated by him. His widow, Colleen, is also a highly respected Ngangkari as is one of their sons, Herbert.

Whiskey began painting in 2005 and developed a passion for it. The main images in his works are the Rockholes near Pirupa, to the west of Ayers Rock, and the story of his journeys to Areyonga and Haasts Bluff. Whiskey was a highly traditional man with an extremely jovial personality and the bold colours evident in many of his works are said to reflect his character – colourful and strong in spirit. His paintings are among the most sought after indigenous works in Australia and overseas.

Further memories of Bill, as told by Glenis Wilkins to Honey Ant Gallery:

Glenis Wilkins was the art co-ordinator for Watiyawanu Artists of Mt Leibig, the art centre where Bill painted.  Glenis was an absolute treasure to her community.  She devoted herself to the artists, caring for the elderly in the community and also had a tremendous positive impact on the children via numerous initiatives.

Over many years we (honey ant gallery) had the pleasure of getting to know Glenis.

Glenis informed us that if she was to open the art shed on a Sunday, Bill would be there.  Bill started painting in December 2005, and he didn’t stop.  He was so thrilled to get his story down that he painted every day that the art centre opened.

Glenis even discovered that Bill had been secretly taking small pieces of canvas and linen back to his house and painting at night.  We saw some of these small pieces and they are of a limited palate and in a very loose and free style.  Still the small works showed his beloved country further to the south near the Olgas, and his ” Cockatoo Dreamtime” story.

Glenis told us how he had a passion for using cadmium orange and as it is an extremely expensive colour, she often would try to limit his use of it by hiding it away.

She told of many visits back to his country, and the joy on his face.  He picked up the beautiful white stones that cover the ground of the sacred site of the white cockatoo.  He did not call them stones.  He called them feathers.  They were the white feathers that the cockatoo lost as he battled with the ancestral crow.  Glenis said it is a very stunning place and we talked about how we would love to go there with Bill one day.

At Bill’s sacred site, which is approximately 100 kms NW of the Olgas, and has no track, there is a pure white rock which stands about three feet tall, and is in the shape of a cockatoo.  It is surrounded by a ring of other large white rocks.  The flat country is covered with flat white stones.

We asked Glenis if the stones might be quartz, as on our desert travels we have sometimes come across large areas covered with white quartz.  But no, Bill’s feathers are hard flat white stones.

The heavy white dotting represents the “feathers” of Bill’s cockatoo.  The rest of the work is his map of country shows rockholes and journey lines and features of landscape.  He lived here as a young man and knew this land intimately.  Survival depended on it.

He was a magificient artist, and equally magificient man.  His story is profiled in this short documentary titled “That Old Man”.  Executive producer Glenis Wilkins superbly captures the depth of Whiskey’s traditional roots.  It makes touching viewing for anyone interested in learning more about Bill Whiskey and Aboriginal culture in general.  Watch now. 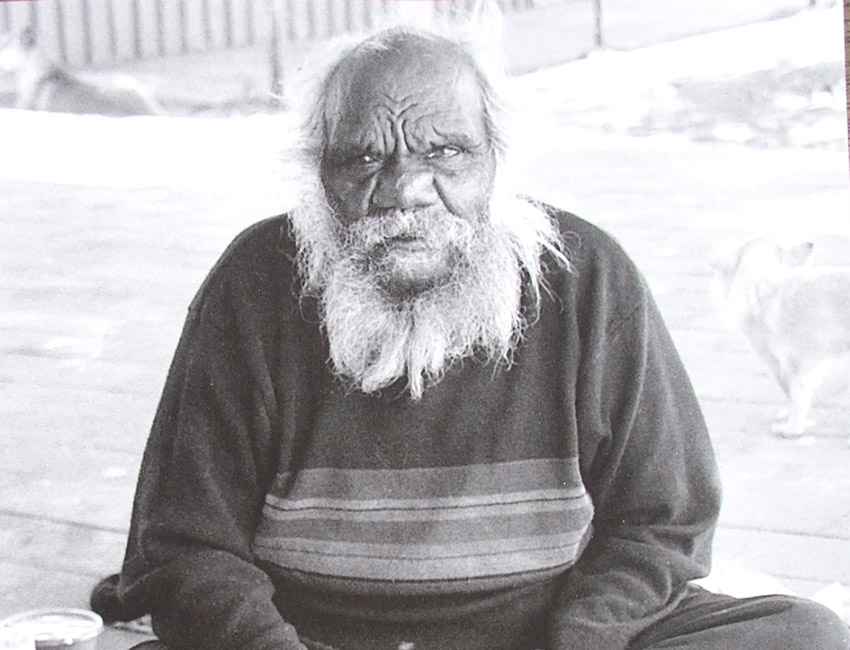 We house a beautiful collection of works by Bill Whiskey. We welcome your enquiries. 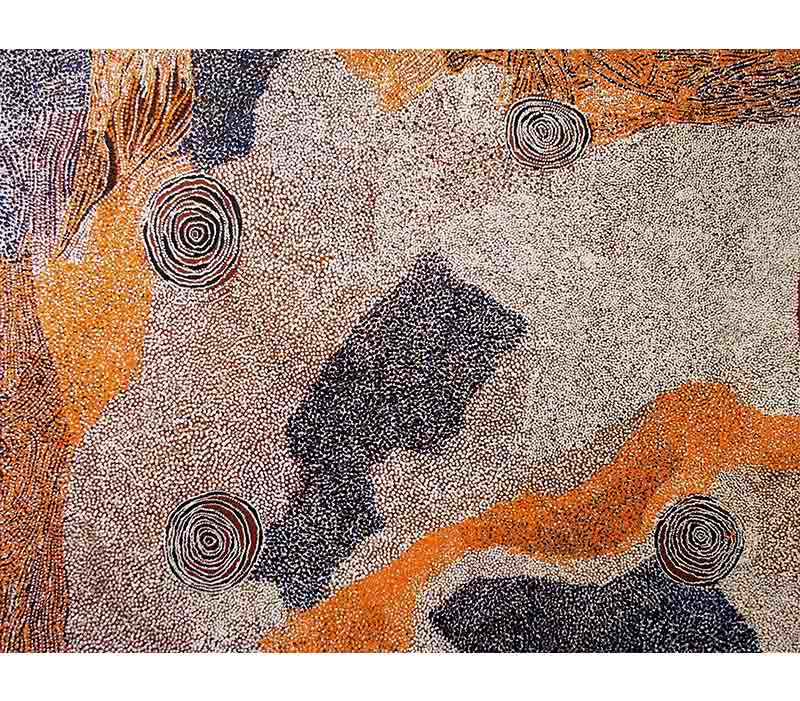 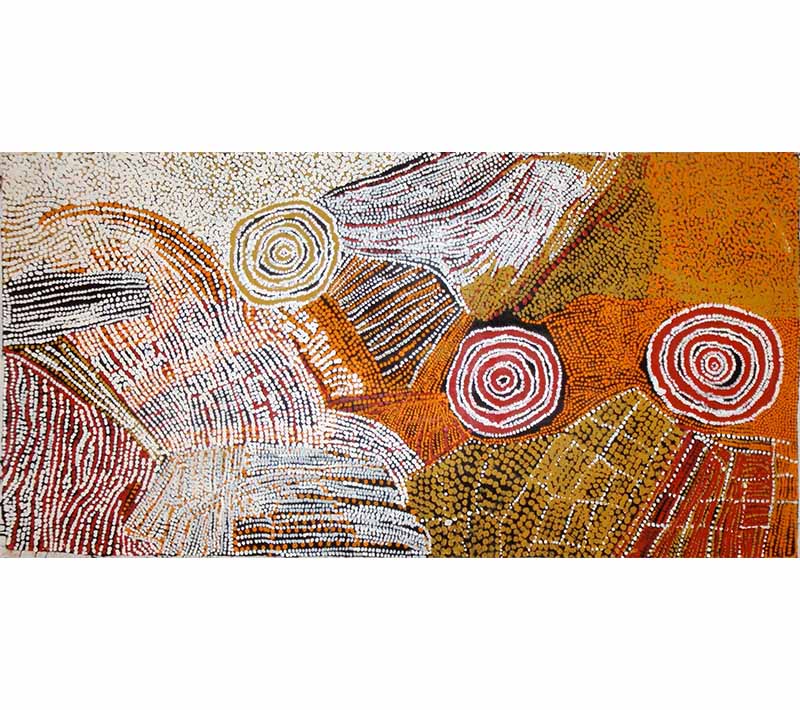 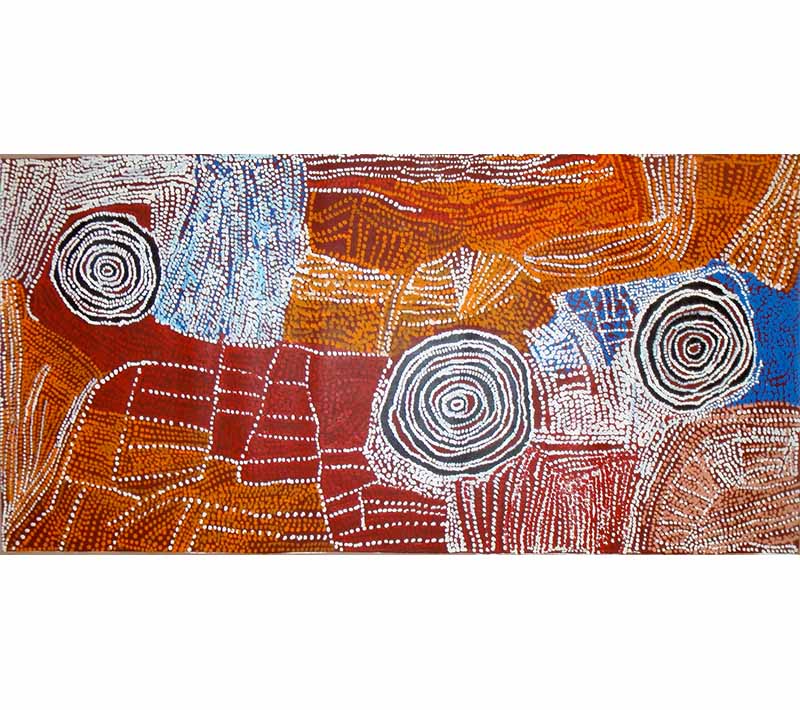 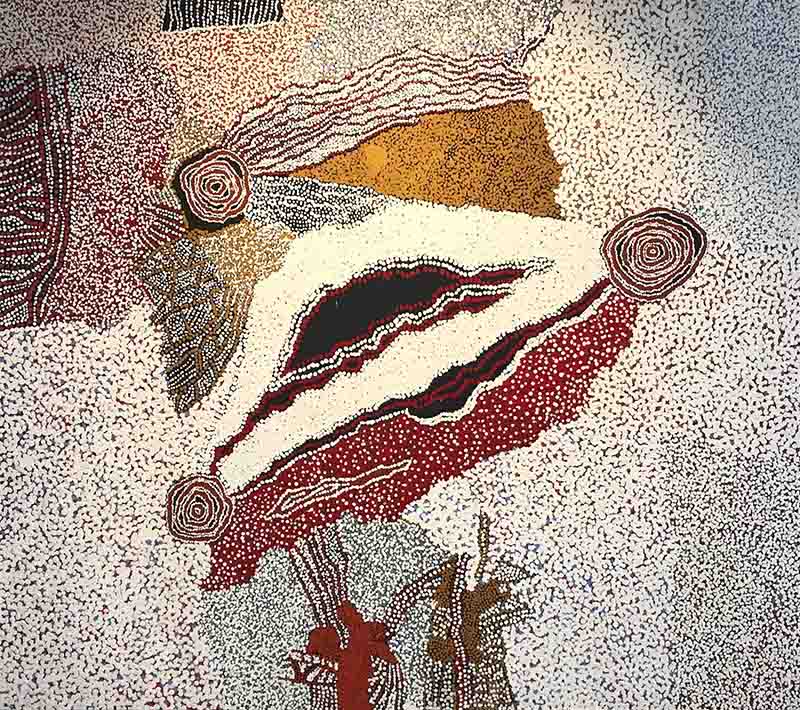